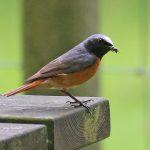 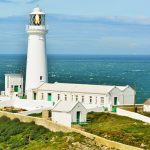 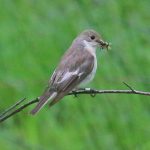 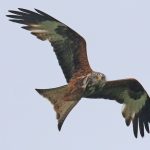 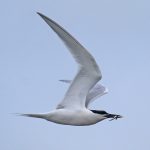 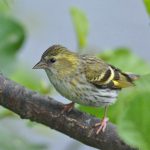 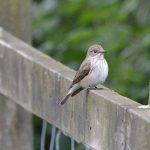 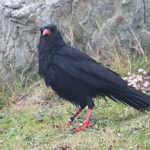 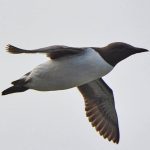 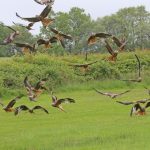 Friday 9th June 2017
We left our base bright and early and after making our first pickups, headed round to Hillingdon near Uxbridge to meet our remaining customers. As we headed north along the M40, it wasn’t long before we located our first English RED KITE, quickly followed by many more plus COMMON BUZZARDS and COMMON KESTRELS.

After a scenic drive through the Forest of Dean, we entered Wales and soon afterwards found our first Welsh RED KITE of the tour! We arrived at the very picturesque Gwenffrwd-Dinas RSPB reserve at lunchtime and tucked into our food in the sunshine.

Afterwards we took a walk along the boardwalk and had good but distant views of a male GARDEN WARBLER as it flitted around a bush, occasionally singing, when it could be compared with a singing male BLACKCAP nearby. The warm weather encouraged insects to come out with GREEN-VEINED WHITE and a fine specimen of GIANT CRANEFLY, the largest species of cranefly in the U.K.

A NUTHATCH nest was found and it was great to watch the adults coming to and fro feeding the youngsters inside the hole. Further along the path we came across our first PIED FLYCATCHERS of the tour as they made feeding forays back to a nestbox close to the path. Delighted with our views we carried on the very damp track and took a path uphill. A few metres along, a female COMMON REDSTART called and we found a pair of them including a very bright male as they flitted along the fence-line below.

Further along, a pair of PIED FLYCATCHERS entertained us and two WOOD WARBLERS were seen briefly before vanishing and with time getting on, we tried the other side of the hill.

We struck gold here by locating a WOOD WARBLER nest situated on the ground with the adults going in and out bringing food where they gave great scope views.

Recent rains had swollen the local rivers and there was no sign of any White-throated Dippers but we did find a fine COMMON SANDPIPER that put on a show flying up and down the river and landing on fenceposts!

With time getting on, we took the return journey along the boardwalk where PIED FLYCATCHERS were seen briefly and then near the carpark, a family party of NORTHERN RAVENS flew over the rocky crags before disappearing from view. Just as we were about to leave, the GARDEN WARBLER was spotted again and we all enjoyed great views as it perched out in the open.

The journey to our hotel took around an hour and more RED KITES were seen along the way. After checking in, we had some time to relax before meeting for pre-dinner drink.

During our evening meal, we were interrupted once or twice with a flyby female GOOSANDER and then a SPOTTED FLYCATCHER that perched up on a dead branch.

Our meal was very filling and we headed off to bed looking forward to exploring the area the following day.


Saturday 10th June 2017
We awoke to light drizzle and poor visibility over the hills but after our hearty breakfast headed out to nearby nature reserve Gilfach Farm. Weather improved considerably as we entered the courtyard with a few LESSER REDPOLLS including a bird perched up on a distant conifer. EURASIAN SISKINS were common as they flew overhead calling and a walk up along a footpath behind the visitor centre yielded a fine SPOTTED FLYCATCHER and a lovely singing TREE PIPIT which showed really well above us.

Back in the courtyard, several members of the group had brief views of a NORTHERN GOSHAWK as it flew past and a walk was taken through the Oak woodland where PIED FLYCATCHERS put on a good showing plus TREECREEPER, EURASIAN BLACKCAP and another singing TREE PIPIT was heard.

Back in the courtyard we found a nesting pair of COMMON REDSTARTS close to the path and brilliant views were had as they brought food back and forward to the nest, occasionally perching on fenceposts in the open.

Down at the Otter Hide we again had good sightings of COMMON REDSTARTS which were nesting in a box opposite the hide! A WHITE-THROATED DIPPER flew downstream at speed so we headed off to try and locate it.

Two more TREE PIPITS were seen in flight and a few HEATH SPOTTED ORCHIDS were in flower in the meadow. At the waterfall a GREY WAGTAIL was seen and the WHITE-THROATED DIPPER was spotted once again albeit briefly.

By now, light rain had started to fall so we headed up to the centre where we had lunch in the restored barn. Afterwards we drove into Rhayader to visit the famous Gigrin Farm Red Kite feeding centre.

Many RED KITES were already congregating overhead as we made our way down to the hides which provided us with shelter from the now persistent rain. At 1500hrs, a tractor with meat in the trailer came into the area and the farmer started shovelling it out onto the open grass. Within seconds the RED KITES came in to feed and numbered around 300 birds!

Amongst them were several wing-tagged birds plus COMMON BUZZARDS including a very pale individual and amongst the CARRION CROWS and ROOKS a NORTHERN RAVEN fed on the meat.

Once we had our fill of the RED KITE spectacular, we headed into the centre for a warming cuppa before heading into the Elan Valley. We spent some time checking the river looking for the elusive White-throated Dipper but to no avail although we did find GOLDCREST, GREY WAGTAIL, SISKIN, COMMON REDSTART and COAL TITS along our route.

With the rain still falling we headed back to base for a hot shower before meeting for a pre-dinner drink. Our evening meal went down well after a good day in the field.


Sunday 11th June 2017
When we awoke the weather had greatly improved and the garden was full of GREAT SPOTTED WOODPECKERS, SISKINS and EURASIAN NUTHATCHES whilst RED KITES and COMMON BUZZARDS glided overhead.

After another good breakfast we loaded up the van and made our way northwards through the southern Cambrian mountains towards Snowdonia. We made a stop for facilities at a Forest visitor centre that was popular with mountain bikers. Bird-wise it was quiet due to the strong winds and drizzle that was being blown through the valley so we enjoyed a coffee in the centre.

WILLOW WARBLERS, GOLDCREST and BARN SWALLOWS were seen and heard, plus a PEREGRINE which briefly stooped through the trees.

Suitably refreshed, we carried on and a while later called in at the Glaslyn Osprey Centre where the river levels were incredibly high and most of the carpark was flooded!

From the veranda of the visitor centre we had distant views of both male and female WESTERN OSPREYS as they flew back and forth to the nest. The CCTV cameras on the nest were being shown on a screen in the centre and we could see three chicks around two weeks old.

A small flock of DUNLIN flew past and on the feeders were lots of HOUSE SPARROWS, EURASIAN SISKIN, BLUE, COAL and GREAT TITS. The staff and volunteers were very informative and kept us up to date with what had been happening this breeding season before we went back to the van for a spot of lunch.

Afterwards we carried on and eventually arrived on Anglesey to gale force winds which made driving rather tricky indeed. Trying to get shelter would be the order of the day so we went straight to Holyhead Harbour where it was less windy but still very blustery.

It wasn’t long before we found our first BLACK GUILLEMOT in the harbour and with a good scan we located at least four more including a pair that were nesting in the harbour wall. One of the birds caught a small PLAICE and had trouble trying to swallow it!

Other birds included EUROPEAN SHAG, GREAT BLACK-BACKED GULL, a superb adult male COMMON SCOTER, RED-BREASTED MERGANSER and out across the bay, small parties of MANX SHEARWATERS were being blown in by the strong winds.

With some time spare we drove the short distant to Cemlyn Bay nature reserve where it was difficult to stand up at times. Despite the conditions, we still managed to find SANDWICH, COMMON and ARCTIC TERNS plus RED-BREASTED MERGANSER, EURASIAN OYSTERCATCHER, SAND MARTIN and MANX SHEARWATER offshore.

As conditions were far from ideal we called it a day and made our way to our hotel, but diverted off to RSPB Valley Wetlands just in case there were some new birds there. A SPARROWHAWK flew across the road carrying prey and on the reserve we found SEDGE and REED WARBLER plus COMMON COOT, GADWALL and TUFTED DUCK although seeing over the reeds was a challenge.

We then drove the short distance to the hotel where we checked in and enjoyed some time before meeting for a good evening meal.


Monday 12th June 2017
We opted for a 0700hrs breakfast which would give us more time birding on our last day in Wales. Afterwards, we headed up to nearby South Stack RSPB reserve where conditions were much improved on the previous day.

As we got out of the van, a RED-BILLED CHOUGH flew low overhead calling – what a start!

We wandered to the cliff edge where good numbers of COMMON GUILLEMOTS and RAZORBILLS huddled together on their nesting ledges whilst NORTHERN FULMAR, BLACK-LEGGED KITTIWAKES and HERRING GULLS were seen either on the sea or cliffs.

More RED-BILLED CHOUGHS fed on the short, grassy areas and included a very confiding bird right in front of us. Most of the group then headed along the clifftop path and took the steps down towards the lighthouse, from where up to five pairs of ATLANTIC PUFFINS could be seen on the cliffs, which was half of the breeding population here at South Stack.

MANX SHEARWATERS and the occasional NORTHERN GANNET passed offshore and from Ellin’s Tower we watched an adult NORTHERN GANNET dive into the water and with clear water conditions, you could see it underwater.

Other species seen here included ROCK PIPIT, COMMON GREENFINCH and EURASIAN SKYLARK before we headed into the café for a hot drink or ice-cream.

With a long journey home ahead of us, we left Anglesey and made a stop at Conwy RSPB reserve for lunch and a brief look. The first lagoon was rather quiet with roosting EURASIAN OYSTERCATCHERS, LITTLE EGRETS, REED WARBLER, PIED WAGTAILS, GREY HERON and a MUTE SWAN family.

Close to the centre we located some superb BEE ORCHIDS before heading off home.

The journey was going well and we managed to clear Birmingham before the traffic got bad only to get a flat tyre a few minutes later!

Thankfully the RAC came out and we were on our way, arriving in Hillingdon just after 2000hrs.

We concluded the tour slightly later than planned but we all agreed that it had a great weekend with some fantastic birding, all with a fun, lively group!