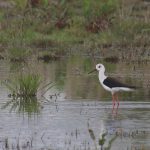 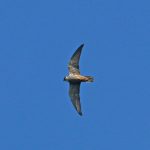 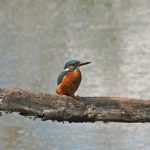 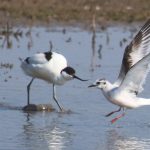 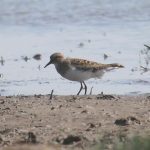 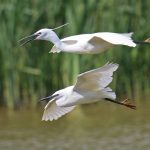 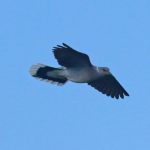 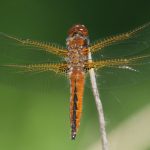 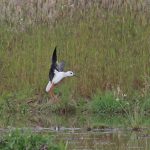 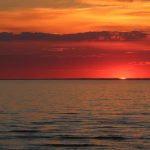 Tuesday 21st May 2019
After making our pickups we were on our way northwards through Suffolk and into Norfolk where we stopped for coffee/breakfast at Mundford which was really enjoyable in the warm sunshine.

As we reached the coast an impromptu stop at traffic lights produced a GREY PARTRIDGE foraging in a nearby field. We called in at Choseley as two Dotterel had been seen the previous day, but despite a thorough search there was no sign, although around six BROWN HARES were good to see.

The carpark at Titchwell was very busy and after parking, we took a walk to Patsy’s Pool where four RED-CRESTED POCHARDS were present, whilst the air was alive with many BLACK-HEADED & MEDITERRANEAN GULLS. WESTERN MARSH HARRIERS circled overhead plus COMMON SWIFTS, BARN SWALLOW, COMMON HOUSE MARTIN and a summer plumaged BLACK TERN hawked insects over the reed-beds.

It was then back to the centre for lunch which was very pleasant indeed before taking a stroll out to the sea. SEDGE and EURASIAN REED WARBLERS were seen from the path along with a brief sighting of BEARDED REEDLING, COMMON REED BUNTING and GREY HERON.

The fresh-marsh was alive with birds including a late group of BRENT GEESE numbering around 70 birds. Vast numbers of gulls had taken over the marsh and there was a distinctive lack of waders, except for a few COMMON REDSHANK, PIED AVOCET and COMMON RINGED PLOVER.

A first summer LITTLE GULL was watched through the scope although it spent most of the time asleep!

A walk was taken to the beach where a single EURASIAN SPOONBILL fed in a saltwater pool, whilst both LITTLE and SANDWICH TERNS passed by.

Back at the Parrinder hide, the LITTLE GULL showed much better as it picked insects off the water in front of us. A couple more SANDWICH TERNS were roosting on the scrape plus COMMON TERN and the usual wildfowl.

It was then time to wander back to the carpark where we made a short drive to our base for the next three nights.

After checking in we had some time to relax before meeting for a pre-dinner drink and then a wonderful evening meal before retiring for the evening after a good first day.

Wednesday 22nd May 2019
Another beautiful sunny day greeted us before breakfast which was delightful and really set us up for the day.

With a lack of waders on our lists, we set off to a new set of pools close to the town of Wells-next-the-sea and parked on the A149. A quick glance on the pager and ‘lo and behold’ there were two Black-winged Stilts present!

A walk down the track later and there were the BLACK-WINGED STILTS parading in full view around the shallow pools. We enjoyed great views in perfect light, with no haze or breeze and they looked rather settled.

A small flock of BLACK-TAILED GODWITS were roosting plus four COMMON GREENSHANK along with good numbers of COMMON REDSHANK, NORTHERN LAPWING, PIED AVOCET and EURASIAN OYSTERCATCHER.

A single COMMON SANDPIPER was foraging in the wet grassland and other birds of note included SEDGE WARBLER, EURASIAN TEAL and a distant RED KITE.

On the way back to the van, a male YELLOWHAMMER was seen in the hedge before flying off.

With news coming through that a single Dotterel had been reported back at Choseley, we headed back there only to find no other birders and a very large field.

We started a very thorough search but apart from EURASIAN SKYLARK and a covey of RED-LEGGED PARTRIDGE it was devoid of life! There was some compensation with a singing male CORN BUNTING and lots of BROWN HARES.

With our stomachs rumbling and in need of a toilet stop, we dropped into Titchwell to make use of the facilities and to have lunch in the picnic area. MEDITERRANEAN GULLS drifted over and several EURASIAN BLACKCAPS were in the bushes before we headed to our afternoon birding location.

With the weather looking good, we drove to Norwich with a view to visit Strumpshaw Fen RSPB reserve, where we arrived in reasonable time to find that several Swallowtail Butterflies had been seen not long before our arrival.

We waited in the sunshine noting HOLLY BLUE, BRIMSTONE, ORANGE-TIP, GREEN-VEINED WHITE, LARGE WHITE and eventually a SWALLOWTAIL flitted over, but instead of stopping to feed it carried on.

Whilst waiting patiently we saw GREAT SPOTTED WOODPECKER and heard a calling EURASIAN BULLFINCH deep in the scrub.

Time just slipped away and it was time to head back to base for a hot shower before dinner.

Our evening meal was delicious and afterwards some of the group wandered down to the beach, seeing two GREY PARTRIDGE on the way and the most fabulous of sunsets. A NORTHERN FULMAR glided over the sea and on the return leg a TAWNY OWL called from the woods, a great end to the day!

Thursday 23rd May 2019
Another fine day greeted us and after a hearty breakfast, we loaded up and drove around The Wash to the fantastic RSPB reserve at Frampton Marsh.

We headed straight round to the reservoir where we could hear a Turtle Dove purring from the hedgerow and by moving a little further on, we had delightful views of a male EUROPEAN TURTLE DOVE in full view. It performed very well, making a few display flights before landing back in its favoured tree.

SEDGE WARBLERS sang nearby and on the reservoir we picked up EURASIAN WIGEON and a couple of PIED AVOCETS were noted.

The walk back to the carpark was quite eventful with a stunning male RUFF in breeding plumage on the wet grassland along with several BLACK-TAILED GODWITS, NORTHERN LAPWING, COMMON REDSHANK and PIED AVOCETS.

We enjoyed lunch in the hot sunshine before taking a walk down to the sea wall at the far end of the reserve. There was plenty to keep us occupied with GREAT CRESTED GREBES looking resplendent in their summer plumage, whilst on the muddy areas we found a few RUDDY TURNSTONE, COMMON RINGED PLOVER and LITTLE RINGED PLOVER with a couple of summer plumaged EUROPEAN GOLDEN PLOVERS present.

The view from the sea wall was fantastic and the light crisp and bright, which made looking for waders quite easy and it wasn’t long before a flock of BLACK-TAILED GODWITS were found. With patience we picked out a moulting CURLEW SANDPIPER being harassed by a COMMON REDSHANK.

A small group of birders had gathered by the carpark so we headed down and on our arrival, a lovely adult TEMMINCK’S STINT fed close-by where we had lovely views as it crept along the muddy bank.

Delighted by this we strolled back and enjoyed a hot drink before heading back to our base. After some time to relax, we met for a pre-dinner drink and the bird-list before tucking into another lovely evening meal.

Afterwards we took a walk down to the beach and watched a fabulous sunset whilst a good number of SANDERLING fed on the beach. A WHIMBREL flew east and a small party of NORTHERN FULMAR were seen off the cliffs, a fine end to the day!

Friday 24th May 2019
Blue skies and sunshine greeted us as we met for breakfast and after we loaded up our luggage and drove the short distance to Hunstanton Cliffs. Here we immediately connected with up to 20 NORTHERN FULMAR that were gliding along the cliff top in the brisk westerly wind.

After enjoying good views we headed to Lakenheath Fen RSPB reserve where we checked in and took a walk out to the hide overlooking the reed-beds. On the way we had excellent views of up to 10 EURASIAN HOBBY hunting overhead whilst WESTERN MARSH HARRIERS quartered the reed-beds before dropping down into the reeds.

Several COMMON CUCKOOS sung but try as we might, we couldn’t see them! The strong wind was welcome in the hot sun but it kept a few birds low, although in the sheltered areas there were quite a few HAIRY DRAGONFLIES plus newly emerged SCARCE CHASERS.

We had lunch back at the centre before heading out into the Washland viewpoint that was very dry due to lack of rain. On the muddy areas was a distant TEMMINCK’S STINT feeding with a COMMON RINGED PLOVER plus EURASIAN CURLEW and along the river a COMMON KINGFISHER zipped past.

Our last site of the day was Lackford Lakes where on our arrival in the visitor centre, a fine male COMMON KINGFISHER perched out in the open and then it flew into the bushes and mated with the female!

A walk was taken down to the double decker hide where we found COMMON TERN, three LITTLE EGRETS, COMMON GREENSHANK and good numbers of the common wildfowl.

It was back to the centre for a welcome ice cream before starting our journey back east after what had been a fantastic tour with beautiful weather, great birds and wildlife and a lovely group of people to share it with!