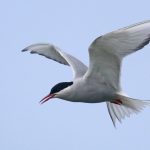 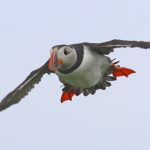 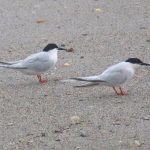 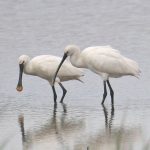 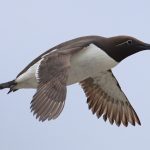 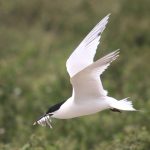 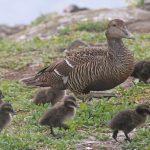 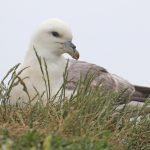 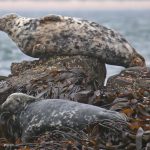 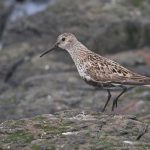 Thursday 14th June 2018
We left our base bright and early to journey northwards. As usual several RED KITE and COMMON BUZZARDS were seen from the motorway as we headed through Essex and Cambridgeshire. After a break for coffee and breakfast, we stopped off at Fairburn Ings RSPB reserve in Yorkshire. This fantastic reserve had recently been featured on BBC TVs ‘Springwatch’ programme and for the group it was great to see it for real.

Feeders around the visitor centre held good numbers of EURASIAN TREE SPARROWS, EUROPEAN GOLDFINCH, EURASIAN BULLFINCH and EUROPEAN GREENFINCHES but no sign of the hoped for Willow Tit.

With news that at least two pairs of EURASIAN SPOONBILLS were nesting on the reserve, we headed across the meadow to a watchpoint. The first pair for 400 years had nested in 2017 so it was a privilege to see these fantastic birds. One bird sat on a dead tree and a pair kept close to a nest in another tree.

Our visit unfortunately coincided with storm ‘Hector’ passing through northern Britain and the wind was rather breezy to say the least! On our way out to the watchpoint we had brief views of a EURASIAN BITTERN over the coal tip but it soon dropped down.

Lots of COMMON SWIFTS fed over the meadow giving close views and on the way back we heard a GARDEN WARBLER at very close range but it remained out of sight.

A dead tree provided us with excellent views of RUBY-TAILED WASPS whilst nearby we found a few spikes of SOUTHERN MARSH ORCHID. The walk up to the coal tips was beautiful in the sunshine but once on the top it was really windy and a job to stand up! A scan of the lagoon produced a female COMMON POCHARD with ducklings plus GADWALL, TUFTED DUCK, MALLARD and both LITTLE and GREAT CRESTED GREBES.

We didn’t stay long and headed back down to the centre where we had lunch outside in what little shelter we could find.

It was then time for the second leg of our journey and in the early evening we arrived at our base for the weekend in the coastal village of Seahouses, where we had some time to spare before meeting for a pre-dinner drink.

After a meal of mammoth proportions we took ourselves into the beer garden where we watched the sunset behind Bamburgh Castle, a fine end to the day! There were of course birds to look at with RED-BREASTED MERGANSERS, COMMON EIDER, SANDWICH TERN and many COMMON HOUSE MARTINS and COMMON SWIFTS.


Friday 15th June 2018
The day was much calmer and the sun shining as we met for breakfast. We tucked into a good selection of food ready for our day visiting the Farne Islands. The group rendezvoused on the quay ready for our 09.30hrs departure.

The boats were busy as the previous day’s sailing had been cancelled but we managed to get a good place on the second boat for our all day birdwatch.

The skipper took us towards Brownsman Island and we had exceptional views of ATLANTIC GREY SEALS basking on the rocks at low tide. NORTHERN GANNETS and a few NORTHERN FULMARS flew past, the former species on their way to and from the breeding colony at Bass Rock in the Firth of Forth.

ATLANTIC PUFFINS became apparent as we neared Staple Island along with COMMON MURRE (GUILLEMOT), RAZORBILL and BLACK-LEGGED KITTWAKES which carpeted the rocky pinnacles and ledges. With some expert manoenevering, the skipper got us close in enabling us to see, and more importantly smell the birds!

At around 10.30hrs we came alongside Staple Island and although there was some swell, we got off the boat and spent a very enjoyable couple of hours soaking in the sights and sounds of a thriving seabird colony.

After we’d had our fill, it was off to Inner Farne where we spent the afternoon. Hundreds of ARCTIC TERNS greeted us with a few pecks to the head as we wandered up the boardwalk towards our lunch stop. SANDWICH and COMMON TERNS were nesting on the central section of the island and several COMMON EIDERS afforded good views especially one female who was nesting inches from the path!

Our time on the island was going quickly so we spent time down on the jetty where a COMMON RINGED PLOVER was spotted on the beach and a summer plumaged DUNLIN foraged on the rocks.

It was then time to head back to Seahouses where we had a brief look in the harbour, but there was little present so we decided to meet for an earlier evening meal.

After some delicious food some of the group took a walk along the coastal path where we saw RED-BREASTED MERGANSER and COMMON REDSHANK whilst offshore a steady stream of auks poured past along with a few NORTHERN GANNETS.

It was then back to the hotel for a good rest after an action packed day!


Saturday 16th June 2018
A lovely bright start to the day encouraged some of us to head out for a pre-breakfast walk which produced RUDDY TURNSTONE and our first EURASIAN ROCK PIPIT of the tour.

Viewing from the hotel was rather productive with LITTLE TERN, EURASIAN CURLEW and a dark morph PARASITIC SKUA that was seen offshore harassing BLACK-LEGGED KITTIWAKES and terns.

Breakfast went down well and afterwards we drove south to Druridge Pools, a superb reserve south of Amble and one of our favourite sites.

The first hide produced two adult EUROPEAN SPOONBILLS which showed well on the shallow pools and both birds were preening each other before feeding in their typical sweeping motion. EURASIAN TEAL, NORTHERN SHOVELER, GADWALL and MALLARDS fed in the shallows whilst a small party of BLACK-TAILED GODWITS roosted on the northern side.

Following a tip off by a local birder we walked to some fields north of the hides, where a few pools had formed with recent rains. Here we were delighted to see a GLOSSY IBIS feeding alongside a LITTLE RINGED PLOVER, COMMON RINGED PLOVER of the arctic race tundrae and a lovely spangly WOOD SANDPIPER.

PIED AVOCETS and COMMON REDSHANKS were doing their best to ward of the larger gulls from robbing their nests on a small pool.

We then visited the other two hides and the walk produced singing WILLOW WARBLER, COMMON WHITETHROAT and EURASIAN BLACKCAP. EURASIAN WIGEON were present in reasonable numbers and the two EURASIAN SPOONBILLS were still present. Three ROE DEER were seen in a nearby field before we took a stroll to the beach.

The tide was low but despite this, we had good views of a summer-plumaged RED-THROATED DIVER on the sea which looked pretty smart in the morning sunshine.

Nearby Cresswell Ponds was our next port of call and we coincided our visit to the hide with a shower of rain which at least meant we had some shelter. Up to four COMMON GOLDENEYE were bobbing around with the TUFTED DUCKS and a lone DUNLIN fed on the sandy spit.

In the reeds near the hide we found EURASIAN REED WARBLER, SEDGE WARBLER and some EURASIAN TREE SPARROWS before our stomachs started rumbling, meaning lunch was on the agenda.

Hauxley Nature Reserve was our next port of call and we were impressed with the new visitor centre which opened in June 2017. Sadly the reserve was closed for our visit in 2017 so it was good to see the completed project.

Lunch was enjoyed in the centre with a cuppa and for some a piece of cake! COMMON SPOTTED and NORTHERN MARSH ORCHIDS were dotted along the path as we wandered down to the Tern hide, where COMMON, ARCTIC and SANDWICH TERNS were seen.

A quick stop was made in the Skua hide but it was difficult to see out without pulling a muscle or two as you had to be a contortionist to use the scopes!

We left the site and made the short drive into Amble where we had booked on a boat to Coquet Island. Our 4pm trip once again coincided with a torrential downpour with thunder and lightning but this time there was no shelter.

Despite everyone getting a thorough soaking, the skipper expertly got us close in to the island where we had superb views of up to 20 ROSEATE TERNS. There were more to see but dripping optics made viewing a slight challenge! NORTHERN FULMAR, ATLANTIC PUFFINS, SANDWICH, COMMON and ARCTIC TERNS were also seen on the western side of the island.

Typically the rain stopped for our return journey back to the harbour and to add insult to injury, the sun came out.

Despite this we headed back to base and spent time drying off our gear before meeting for another superb evening meal in the restaurant.


Sunday 17th June 2018
We awoke to sunny conditions and after a hearty breakfast, loaded up the van and drove to the picturesque Harthope Valley, close to the market town of Wooler.

After parking we spent an enjoyable hour or two exploring the valley, where we got off to a good start with small numbers of WILLOW PTARMIGAN (RED GROUSE) on the heather covered slopes. A lone SPOTTED FLYCATCHER flitted about through the riverside trees and a few LESSER REDPOLL and EURASIAN SISKIN flew over.

We gave the river a thorough check but failed to find any White-throated Dippers but a single SPOTTED FLYCATCHER was some compensation.

We spent some time checking out a site where we had previously seen Whinchat but the breezy conditions kept most small birds down except for LESSER REDPOLLS which showed well.

With time getting on we left the site and stopped off in Wooler where we picked up lunch, then headed south to Durham where we stopped to tuck into our food.

The journey home was pretty painless except for a thirty minute delay on the A1 and provided us with the usual views of RED KITES, COMMON BUZZARDS and COMMON KESTRELS.

We arrived back in Essex mid-evening after what had been a fantastic tour with lots of birding highlights.