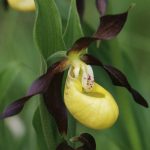 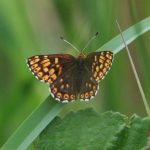 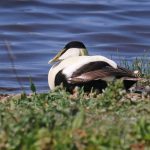 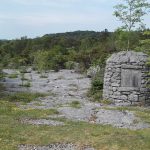 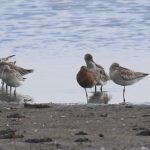 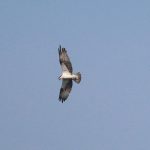 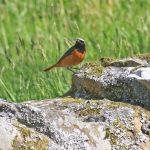 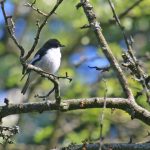 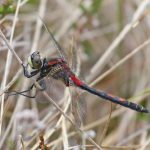 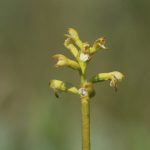 Saturday 26th May 2018
After completing our pickups, we began the journey northwards and spotted a single RED KITE as we passed through the Fens in rather gloomy and misty conditions. The traffic was pretty good until we reached Lancashire where we were caught in the bank holiday rush heading to the Lake District.

Despite this we arrived at Leighton Moss RSPB reserve around lunchtime and headed to the wildlife garden where we spent time having lunch. A wedding was taking place on the reserve and the education area of the visitor centre was being used for the reception.

Afterwards we wandered out towards the northern end of the reserve noting a singing WILLOW WARBLER, CETTI’S WARBLER and the first of several WESTERN MARSH HARRIERS that were nesting on the reserve.

A brisk breeze blew through the Causeway hide which was rather pleasant and cooled things down a little. Around the hide entrance we noted large numbers of COMMON BLUE, AZURE BLUE and BLUE-TAILED DAMSELFLIES, whilst out on the water were many TUFTED DUCKS plus COMMON POCHARD with ducklings, GADWALL, MUTE SWAN, a pair of nesting GREAT BLACK-BACKED GULLS and best of all, two cracking summer-plumaged BLACK TERNS!

These delightful terns put on a show hawking insects above the water and reed-beds and at times they were joined the many COMMON SWIFTS also feeding over the reserve.

The remainder of the afternoon was spent in the southern section where we had a fantastic view of the reserve from the sky tower and on the pool we found the long-staying GREATER SCAUP roosting with TUFTED DUCKS and COMMON POCHARDS.

The Jackson hide was rather quiet but the same could not be said for the Grizedale hide where a young male RED DEER fed quietly in the reed-beds and a real highlight were two WESTERN OSPREYS seen in flight over the pools.

It was great to see these birds which are now established in the area with several breeding pairs. Other species of note included COMMON BUZZARDS, WESTERN MARSH HARRIERS and in the woodland we enjoyed watching a EURASIAN NUTHATCH as it clambered over logs and tree trunks.

With time getting on we headed to our accommodation for the next three nights and after a refreshing shower, we met for our evening meal after a long day.


Sunday 27th May 2018
We met for breakfast at 7.30am with the sun shining, although there was still a breeze blowing from the northeast.

Afterwards we drove the short distance to Gait Barrows reserve where we explored the area. Our visit coincided with a Lady’s Slipper Orchid open day which was perfect as it was one of our main targets for the weekend. The entrance to the woodland held a small amount of HERB PARIS plus several species of fern.

Cloud cover had increased as we walked along the path and once reaching the limestone pavement, we could clearly see the LADY’S SLIPPER ORCHIDS. It was great to get the opportunity to enjoy this rare orchid at close range and predictably, many photos were taken!

Once we’d had our fill, we wandered around the limestone pavement where DINGY SKIPPER and several FOUR-SPOTTED SABLE MOTHS were on the wing but were incredibly mobile.

The geology of the site was simply amazing with trees and scrubs growing out of the limestone pavement covering the top of the hill. After a tip off from the warden we visited a clearing and luckily for us, a visitor put us onto a resting DUKE OF BURGUNDY. This species was very much on our radar once again and it was good to get the chance to see this wonderful butterfly!

After another look at the Lady’s Slipper Orchids, we headed back to the van and made a brief stop at Leighton Moss RSPB reserve for facilities, then popped into Warton Crag nature reserve. We hoped the sunshine would encourage butterflies out but although we added ORANGE-TIP, COMMON BLUE and LARGE WHITE, we couldn’t find any fritillaries.

One of the group had brief views of a PEREGRINE FALCON in the quarry before we cut our losses and headed into Cumbria. After picking up lunch we tucked into it on the Kent Estuary where the tide was just coming in. Several EURASIAN OYSTERCATCHERS fed on the sandy shores and a male RED-BREASTED MERGANSER flew past.

Once refreshed we visited Foulshaw Moss nature reserve and spent a very enjoyable time exploring the circular boardwalk. One of the highlights were small numbers of WHITE-FACED DARTER DRAGONFLIES that gave good views on the boardwalk and undergrowth bordering the path. Lots of LARGE RED DAMSELFLIES and FOUR-SPOTTED CHASERS were seen well in the warm sunshine.

We reached a viewpoint where a volunteer had several scopes trained on a WESTERN OSPREY nest and although distant, we had good views of both male and female birds. Other species present in the area included a few LESSER REDPOLL, EUROPEAN STONECHAT, MEADOW PIPIT and GREAT SPOTTED WOODPECKER.

With a few sites still to visit, we popped into a nearby reserve where the wildflowers were amazing and here we saw five species of orchid including GREATER BUTTERFLY, EARLY PURPLE, PYRAMIDAL, COMMON SPOTTED and the beautiful FLY ORCHID of which we found several spikes.

Another DINGY SKIPPER showed well before it was time to leave and make one last visit to Leighton Moss RSPB reserve, this time for the Eric Morecambe complex. This consists of a few pools close to the coast and the best places to see wildfowl and waders. It didn’t disappoint with both BAR-TAILED and BLACK-TAILED GODWITS along with PIED AVOCET, EURASIAN OYSTERCATCHER, COMMON REDSHANK, COMMON GREENSHANK plus EURASIAN WIGEON and a superb ARCTIC TERN.

Unfortunately time ran away with us and it was soon time to leave the area and return to base where it was good to have a break before our evening meal which went down very well indeed.


Monday 28th May 2018
We met for an earlier breakfast and afterwards headed through the southern part of the Lake District towards Barrow in Furness and Sandscale Haws NT reserve. We had arranged a private tour with the ranger to see the rare Coralroot Orchid.

Whilst waiting for the ranger we took a walk down to a series of pools and found several PALMATE NEWTS plus lots of NATTERJACK TOAD tadpoles in the shallow water. In the scrub we watched a singing male COMMON WHITETHROAT plus DINGY SKIPPER, SMALL COPPER and ORANGE-TIP BUTTERFLIES.

Our walk took us alongside the Duddon Estuary and we made several stops where ranger Neil pointed out interesting plants and features of this fantastic area.

After several slopes which were quite exhausting in the hot sunshine, we reached the spot where we saw CORALROOT ORCHID. This orchid is incredibly hard to spot and is prone to trampling so a guided walk is necessary.

We were lucky to get back to the van in time, as the area was swamped with cars with the bank holiday weather bringing people out in droves.

We headed into Barrow-in-Furness to pick up lunch and enjoy a cold drink before heading to nearby Walney Island where we visited the nature reserve at the southern end.

On the drive down we spotted lots of COMMON EIDERS both on the water and roosting on land as the tide was dropping.

Lunch was enjoyed in the picnic area where a NORTHERN RAVEN flew over and a couple of COMMON RINGED PLOVERS scuttled around on the saltmarsh. A large flock of feeding terns looked very much like SANDWICH TERNS.

After getting our permits we took a circular route around the northern side of the reserve and a look at the sea provided us with several NORTHERN GANNETS, SANDWICH TERN, ATLANTIC GREY SEAL plus waders which included GREY PLOVER, RED KNOT and SANDERLING.

Despite a little trouble reaching one of the hides, we concluded our visit overlooking a small pool where we had excellent sightings of several COMMON EIDERS, in what was probably the strangest hide we had ever visited, as it featured lots of porcelain birds around the walls!

By now the heat was overbearing so we made the one hour journey towards base with a quick stop at Warton Crag, but it was really quiet so we returned to the hotel for a cool shower before meeting for our evening meal which was very welcome after a hot day in the field!


Tuesday 29th May 2018
Breakfast was again at the earlier time of 7.00am as this would give us the opportunity to fit some birding in before heading home later in the day.

Our first birding site was a secluded valley where we hoped to find some of the breeding species that visit the area during the summer. A male GREY WAGTAIL flew past as we crossed the stream and after a few hundred metres a male COMMON REDSTART appeared on a fence where he showed well before flitting around the tree-covered hillside. WILLOW WARBLERS were also present in good numbers and it was great to find at least three SPOTTED FLYCATCHERS although they were not easy to see in the dappled shade.

Another male COMMON REDSTART flitted around on the slopes and a few metres away we came across a male EUROPEAN PIED FLYCATCHER, nesting in a small crack in a tree. The female was presumably on eggs, so the male flitted about and occasionally sang from an exposed perch.

Unfortunately it was time to move on to the Forest of Bowland and within a few minutes of arriving, we spotted our first WILLOW PTARMIGAN amongst long grass on the moor. Several EURASIAN CURLEW were seen in the area plus lots of EURASIAN SKYLARKS and MEADOW PIPITS.

Whilst taking a slow drive along the road we spotted a WHITE-THROATED DIPPER in flight beside a small stream and further up the hill we found both male and female WILLOW PTARMIGAN with a single chick! A RED KITE flew distantly over the hills before we stopped at a spot to eat lunch.

A male NORTHERN WHEATEAR was on the rocks and COMMON BUZZARDS and COMMON KESTRELS frequented the tops of the crags.

With time running away with us, it was with sadness that we had to leave the area. Our journey didn’t get off to a good start as we travelled several miles along a single carriageway only to find the road closed! We retraced our steps and eventually made it on to the motorway and our journey back to Essex.

We dropped everyone off after what had been a superb weekend packed with some brilliant wildlife sightings, all spent with a fantastic group of customers!