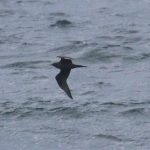 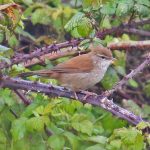 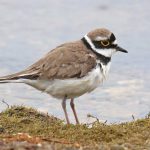 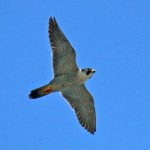 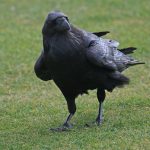 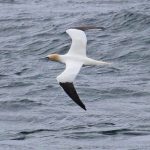 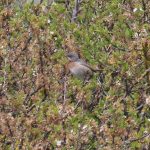 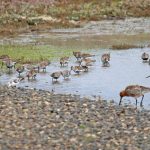 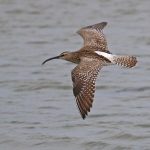 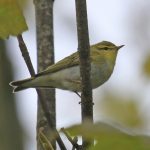 Saturday 29th April 2017
We left Essex bright and early and after our pickups were complete headed southwest noting a few COMMON BUZZARDS and a brief RING-NECKED PARAKEET close to the M3/M25 junction.

A RED KITE was seen as we neared Winchester and once the build-up of traffic eased around Bournemouth we were soon arriving in Weymouth.

Our first port of call was Ferrybridge for facilities which produced NORTHERN RAVEN, EURASIAN SKYLARK and some fly through BARN SWALLOWS.

On Portland itself we dropped into the Cheyne Weare quarry where a group of birders overlooked a scrub covered gully and a few minutes later, we were watching a fine male EASTERN SUBALPINE WARBLER. It flitted around, occasionally perching up so we could view of this scarce migrant.

COMMON WHITETHROAT, WILLOW WARBLER and a singing SEDGE WARBLER were noted whilst from our clifftop viewpoint we added NORTHERN FULMAR, COMMON KESTREL and PEREGRINE FALCON to our lists.

Moving along the coast we tried to get better views of the PEREGRINE FALCON which did a superb flyby over our heads. The warm sunshine produced WALL BROWN BUTTERFLY and below in a sheltered cove we watched up to five NORTHERN WHEATEARS catching flies on the rocks. One of the highlights was a COMMON WALL LIZARD basking on the rocks, this being one of very few UK sites it can be seen.

Next stop was Portland Bill itself and a look at the small seabird colony provided us with views of COMMON GUILLEMOT, RAZORBILL, EUROPEAN SHAG, NORTHERN FULMAR and a steady stream of NORTHERN GANNETS offshore. A single WHIMBREL flew past and a ROCK PIPIT perched up nicely on a nearby fence. As we headed over to the carpark, a probable NORTHERN WHEATEAR of the Greenland race leucorhoa was seen well as it sat on a fence around a small compound.

With time to spare we walked to a large grassy field where we heard YELLOW WAGTAIL calling but it didn’t show. A look in the observatory quarry was reasonably productive with SEDGE WARBLER, COMMON WHITETHROAT and many WILLOW WARBLERS.

After checking out recent sightings at the observatory we popped up to the top fields where a PEREGRINE FALCON did not like a COMMOM BUZZARD on its territory and the grazed horse paddocks yielded a stunning male WHINCHAT plus a few NORTHERN WHEATEARS. On passing the observatory quarry we had brief views of a female COMMON REDSTART plus our first COMMON SWIFT of the year powered in-off the sea heading north.

It was then time for a cuppa down at the bill which gave some of the group outstanding views of a NORTHERN RAVEN as it ate ice-cream from the grass.

Before heading to the hotel we popped into Portland Castle as there had been reports of a Wood Warbler. After some brief searching, we found a cracking SPOTTED FLYCATCHER plus the WOOD WARBLER which was still present as it fed in sycamores above us.

It was then time to get to the hotel where we had some time before meeting for our evening meal which went down well after a long day.


Sunday 30th April 2017
With the weather due to deteriorate late morning, we opted for an early breakfast to enable more time in the field first thing. We drove straight to Ferrybridge where the tide was coming in and pushing the waders in closer. We enjoyed excellent views of DUNLIN mostly in breeding plumage plus two winter plumaged SANDERLING.

Up to four WHIMBREL fed along the saltmarsh edge with some brilliant BAR-TAILED GODWITS in brick red breeding plumage. Other waders included a RED KNOT, COMMON RINGED PLOVER, RUDDY TURNSTONE and OYSTERCATCHER whilst over the open water were LITTLE and SANDWICH TERNS.

Then the tide had come right in so we headed down to Portland Bill for a spot of sea-watching.

A message came on the pager about two Turtle Doves opposite the Bird Observatory and as we were only 30 seconds away we pulled up and had good scope views of just one TURTLE DOVE feeding with WOOD PIGEON and STOCK DOVE in a recently tilled field. On the bill waves were crashing in against the cliffs so we took up sheltered positions on the west side of the rocks and spent time scanning out to sea before the rain came upon us. NORTHERN GANNETS were incredibly numerous as were COMMON GUILLEMOTS and RAZORBILLS that mainly drifted past on the sea. A couple of WHIMBREL flew past but the main highlights were four ARCTIC SKUAS in both pale and dark phases, COMMON SCOTER, BLACK-LEGGED KITTIWAKES, three MANX SHEARWATERS and a summer plumaged BLACK-THROATED DIVER that flew east.

The BBC were spot on today for the time the rain was coming and at 11.00am we headed off for shelter in the nearby cafe for a warming cuppa. With wet weather set in for most of the day, we opted to head east and visit the excellent reserve at Blashford Lakes near Ringwood.

An hour later we pulled up in the carpark with rain still falling and headed straight into the Tern Hide overlooking Ibsley Water. Hundreds of BARN SWALLOWS, HOUSE and SAND MARTINS fed low over the water with the occasional COMMON SWIFT thrown in for good measure.

One of the most common birds appeared to be MEDITERRANEAN GULL with 46 birds counted, mostly of which were in breeding plumage. Waders included LITTLE RINGED & RINGED PLOVERS, NORTHERN LAPWING, COMMON REDSHANK and a single DUNLIN.

Eventually the rain eased and we ventured out of the hide and onto a raised bank behind where a panoramic view of the area could be had. A HOBBY was well picked out as it flew along the northern shore before swooping down out of view and with patient scanning through the many BLACK-HEADED GULLS we eventually located the long-staying first summer BONAPARTE’S GULL feeding alongside BLACK-HEADED GULLS allowing for good identification comparisons to be made.

With some time spare we walked into the woodland area where EURASIAN NUTHATCH and SISKIN were on the feeders in the carpark. BLACKCAP and CHIFFCHAFF sang on our way to the hide and in the trees above, we had brief views of a GARDEN WARBLER as it flitted about.

Birding from the hide was rather quiet although we did see EURASIAN JAY, GREAT SPOTTED WOODPECKER and a few CHAFFINCHES amongst others. With rain starting to fall again we headed back to the van and started our journey back to Weymouth.

It was great to get back in the warm and dry and after our evening meal, the heavens opened and we hoped the weather would improve the following day!


Monday 1st May 2017
With the weather looking better with only a little rain forecast (well it is Bank Holiday after all!) we met for breakfast at a slightly later time and a couple of the group had already popped into Lodmoor RSPB reserve and heard GRASSHOPPER WARBLER with a few other good sightings.

With that in mind, we headed straight there after breakfast and had an enjoyable time wandering about. There was no further sign of the Grasshopper Warbler but we did have reasonably good views of several CETTI’S WARBLERS plus REED WARBLER, SEDGE WARBLER and COMMON WHITETHROAT.

The lagoons were very productive with a superb flock of LITTLE TERNS flying in from Weymouth Bay and joining several SANDWICH and a COMMON TERN. Two WESTERN MARSH HARRIERS glided over the reed-beds and occasionally could be seen perching on fence-posts out on the marsh.

Along the southern track we found two COMMON GREENSHANK plus BLACK-TAILED & BAR-TAILED GODWITS, OYSTERCATCHER and a few DUNLIN.

With the weather now looking good we opted to make a drive to Arne RSPB reserve on the edge of Poole Harbour. A few SISKINS were in the carpark and coming in to feed on the visitor centre feeders along with NUTHATCH and lots of CHAFFINCHES.

After a spot of lunch in the excellent tea room we took a walk around Coombe Heath where on a small pond we were DOWNY EMERALD & BROAD-BODIED CHASER DRAGONFLIES plus lots of LARGE RED DAMSELFLIES. Two of the group lingered at the pond and saw a smart GREEN HAIRSTREAK when it landed on a pair of binoculars!

Our walk eventually produced sightings of up to three DARTFORD WARBLERS plus SLOW WORM and COMMON LIZARD in the Heather. The return leg yielded singing TREE PIPIT and a distant HOBBY as it flew high over the woods.

It was then time to leave and begin the journey back to our base in Essex. Due to a seven car shunt on the M3 we had a 45 minute delay, but nevertheless arrived back very happy after enjoying a superb weekend of birding on the south coast!