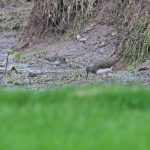 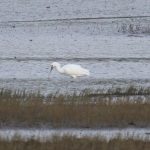 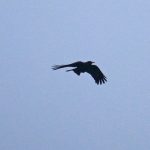 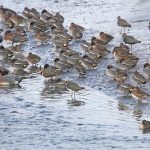 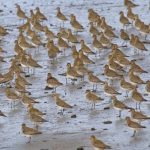 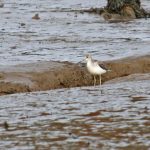 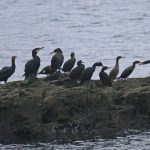 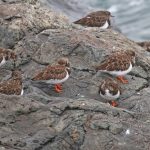 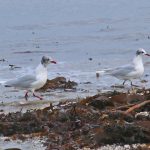 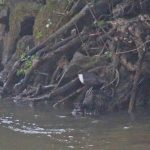 Friday 11th January 2019
We left our base in Essex at 6.00am and started our journey westwards, making our last pickup close to Wraysbury. A few ROSE-RINGED PARAKEETS were seen and the journey to Devon was livened up by a couple of RED KITES plus COMMON BUZZARDS, one field holding around 25 birds!

Our main site today was Broadsands, situated on the coast close to Paignton and Torquay on the English Riviera. Whilst we had lunch we watched several COMMON CHIFFCHAFFS flitting around the scrub plus GREAT SPOTTED WOODPECKER and a mixed group of finches.

We headed straight over to the back of the carpark where seed is put down in the winter for Cirl Buntings. We searched hard but there was no sign although a COMMON KESTREL perched in the nearby bushes didn’t help our cause. Eventually and with patience, we found a male CIRL BUNTING perched on top of a hedge and we had good scope views of this sought-after species. We opted to return later when we hoped that birds would be more visible once the Kestrel had moved off.

A scan from the seafront produced two GREAT NORTHERN DIVERS plus a couple of COMMON SCOTER as well as NORTHERN FULMAR, NORTHERN GANNETS, EUROPEAN SHAG and GREAT CORMORANTS. We then walked up over the headland towards Elberry Bay where height gave panoramic views over the area. Two RED-THROATED DIVERS, a BLACK-NECKED GREBE, EURASIAN ROCK PIPIT, ATLANTIC GREY SEAL and two very distant RAZORBILLS were all good to see.

It was back down to the carpark area where a wintering YELLOW-BROWED WARBLER had taken up residence and as we walked to the back of the carpark, we could hear it calling! The bird was incredibly mobile and quite elusive but we all managed to see it, some better than others. Up to four COMMON CHIFFCHAFFS were seen plus a brief view of a male COMMON FIRECREST.

We concluded over at the 2nd car park where CIRL BUNTINGS were still in the field and we counted up to 18 of these delightful birds. With the light going we headed to our base a short distance away, where we checked in and met for our evening meal which went down well after a long day!

Saturday 12th January 2019
After a hearty breakfast we loaded up and began our journey westwards into Cornwall. The weather was rather murky to say the least with low cloud, drizzle and gusty winds making things unpleasant.

As we drove towards the coast, the weather improved and we struck gold as we passed through a small village where we found two WHITE-THROATED DIPPERS on a fast flowing stream. It was then onto Pendower where we spent a very enjoyable time overlooking the sea.

Despite a thorough search, we failed to locate the recently present Pacific Diver but not through the lack of trying!

We picked up lunch at a supermarket in Truro before heading to nearby Devoran where a Lesser Yellowlegs has taken up residence since October 2018. Once again we scanned the whole area but drew a blank and saw a COMMON GREENSHANK which was little compensation.

Moving onwards to Falmouth and the beach at Swanpool where offshore we had good views of a COMMON DOLPHIN feeding, plus along the shoreline were two adult MEDITERRANEAN GULLS feeding alongside BLACK-HEADED GULLS for good comparison.

Our last port of call was Helston Water Treatment Works which was home to really good numbers of COMMON CHIFFCHAFF plus GREY WAGTAIL and we had a flyover EURASIAN SPARROWHAWK and PEREGRINE FALCON not to mention lots of COMMON BUZZARDS.

A walk was taken down towards Loe Pool but apart from a EURASIAN JAY and GOLDCREST it was rather quiet. With the light dropping rapidly we had a quick look at the boating lake and imagine our surprise when there was a drake FERRUGINOUS DUCK! This bird had been seen on New Years Day but not since so we were delighted to have such good views.

After checking into our accommodation, we had time to relax before meeting for our evening meal which was very good indeed.

Sunday 13th January 2019
With it not getting light until 08.20am, we had a relaxed breakfast as our birding was to be around the Penzance area which was not far away. Our first port of call was the Jubilee Pool where the tide was just dropping and below us on the rocks and beach were up to five PURPLE SANDPIPERS and a group of RUDDY TURNSTONE. At least five COMMON EIDER bobbed around on the open sea and on nearby rocks, we had excellent views of both GREAT CORMORANT and EUROPEAN SHAG.

Persistent scanning yielded rewards with a small dark distant diver being seen out across Mount’s Bay and we tracked it moving northwards noting no ‘white wheel arch’, a shortish bill and small structure. Although the bird was distant, it was very different to the Black-throated Divers we had scrutinised the previous day. After studying the internet for photographs and reference material, we were all happy with the identification of PACIFIC DIVER! As the bird continued towards the shore, a windsurfer appeared and despite searching, the bird wasn’t seen again.

We did have some compensation in the form of six COMMON SCOTER and a handful of GREAT NORTHERN DIVERS plus BLACK-LEGGED KITTIWAKE and COMMON GUILLEMOT.

Back along the beach we found a single SANDERLING plus COMMON RINGED PLOVERS and DUNLIN which had now joined the PURPLE SANDPIPERS and RUDDY TURNSTONES.

It was then up to nearby Drift Reservoir where a scan of distant fields provided us with scope views of up to two WESTERN CATTLE EGRETS in a field with livestock behind the northwest arm of the reservoir.

With our luck seemingly in, we tried our chance at finding Chough and as we exited the van, there on the short turf were two RED-BILLED CHOUGH! We had good views of these very much sought after birds as they fed on the sheltered slopes of the valley. At least two NORTHERN RAVENS were seen plus a few COMMON KESTRELS.

With our stomachs starting to rumble, we drove down into Hayle and visited Copperhouse Creek that provided us with views of COMMON GREENSHANK, GREY PLOVER and as were about to leave, a EURASIAN SPOONBILL which wandered out from behind a mud bank and fed in the shallow waters. At least three MEDITERRANEAN GULLS were also seen.

A Philps Pasty Shop visit is a must on our tours to the Southwest and people were queuing out of the tour when we pulled into the carpark. After picking up our pasties, we took them to the nearby RSPB reserve where the hide overlooking Ryan’s Field was the perfect place to tuck in.

A PEREGRINE FALCON caused havoc over the Estuary with birds everywhere in the sky so we headed over that way and were treated to superb views of waders and wildfowl all in perfect light. A single BAR-TAILED GODWIT was seen plus hundreds of NORTHERN LAPWING and EUROPEAN GOLDEN PLOVER alongside EURASIAN TEAL and EURASIAN WIGEON, resplendent in their breeding plumage.

Despite a thorough search, we couldn’t find the wintering Garganey which had left overnight according to a local birder we spoke too.

With the wind due to increase as the afternoon progressed, we opted to head once again down to Swanpool in Falmouth for another crack at the BLACK GUILLEMOT. Choosing a higher vantage point above the beach we diligently searched for a grey bird on grey water, not easy on the eyes! Eventually it was located some way out but only half the group managed to get on it and it was never seen again. There was some compensation with up to five MEDITERRANEAN GULLS on the beach plus at least six pairs of NORTHERN FULMARS displaying on nearby cliffs.

It was then time to take a slow drive back to base where it was good to have a hot shower before meeting for our evening meal which was delicious.

Monday 14th January 2019
We opted for an earlier breakfast and said our goodbyes to Helston to head straight for Devoran hoping our luck would be in with the Lesser Yellowlegs. On arrival the tide was coming in nicely and our best chance would be to find it roosting with other waders.

Slowly we scanned through the flock and noted a lone SPOTTED REDSHANK plus an oddly plumaged DUNLIN amongst COMMON REDSHANKS and EURASIAN CURLEWS, but unfortunately the Lesser Yellowlegs failed to appear.

A LITTLE GREBE was added to our ‘grebe list’ making five species seen during the weekend and an immature PEREGRINE FALCON caused mayhem amongst EURASIAN WIGEON and EURASIAN TEAL.

A EURASIAN BLACKCAP was heard ‘chacking’ up on the ivy-covered slopes and several NORTHERN RAVENS flew over.

We headed off eastwards and up towards Wadebridge where we hoped our next targets would be present.

Parking in Chapel Amble village, the flooded field opposite the carpark held up to 10 WATER PIPITS feeding alongside good numbers of MEADOW PIPITS. Two GREEN SANDPIPERS flew over from behind the village pub which was where we were heading.

There on the River Amble was a single GREEN SANDPIPER and alongside it was a cracking TEMMINCK’S STINT. This bird is very unusual in winter and should be somewhere in Africa!

We had good scope views as it crept along the river bank where it was joined by a male COMMON CHAFFINCH which was pretty much the same size.

Time was running away with us so we had one more look at the WATER PIPITS before starting our journey home.

We arrived back during early evening after what had been a great tour with some quality species enjoyed in good company.